Sydney, the capital of New South Wales has the highest population in this part of the globe. Sydney hosted the 2000 summer Olympics and is ranked as an Alpha Global City by the Globalization and World Cities Research Network (GWaC), reflecting its influence on the global economy. The city is on the east coast of Australia and circumvents the world's largest natural harbor. Today Sydney has an advanced diversified economy with strengths in finance, manufacturing, education and tourism. Sydney's population is over 5 million and has significant number of people who are born outside Australia. Most notably, there are large numbers of residents from China, Hong Kong, United Kingdom, India, New Zealand, Vietnam, Philippines, Lebanon and South Korea.
Sydney is the most convenient starting point to Australia for many international visitors. It gets over 2 million international visitors annually and is one of the top visited cities globally. Tourists visiting Sydney are mostly from China, New Zealand, the United Kingdom, the United States, South Korea, Japan, Singapore, Germany, Hong Kong, and India. Some of it natural attractions including the Sydney Harbour, the Royal Botanic Garden, and the Royal National Park and man-made attractions include the Sydney Opera House, Sydney Harbour Bridge and the Sydney Tower.
Given its advanced diversified economy, large immigrant population coupled with its tourism industry, Sydney has a huge traffic of regular international students and travelers. Visitors to Sydney should ensure that they have proper travel medical insurance while in Australia. 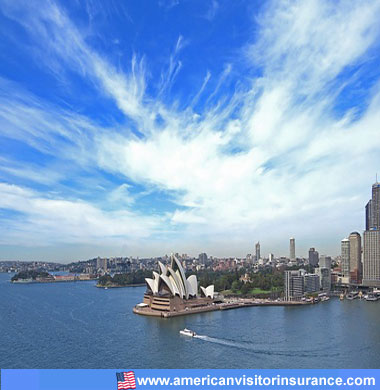 Coverage for Pre-existing diseases or ailments

Health insurance for non immigrants in US on temporary work visas.

Insurance for US residents visiting Sydney

Annual travel insurance for frequent travelers to and from Sydney

Group travel insurance for Sydney for five or more travelers on same itinerary. 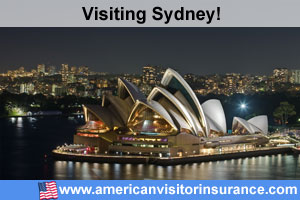 One of the world's great icons, the Sydney Opera House is a UNESCO World Heritage Site and the star attraction on the glittering harbor. 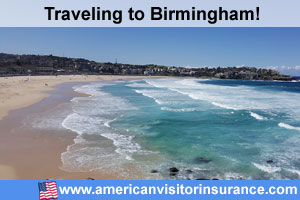 Sydney is famous for its fabulous beaches. Tucked around the harbor are many sheltered coves with calm water and sugary sands. 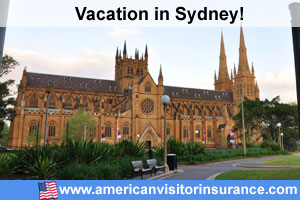 St. Mary's Cathedral is a symbol of the spiritual beginnings of the Catholic Church in Australia. 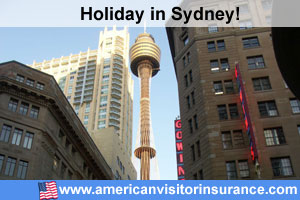 The plans which have limitations for travelers or students located in Sydney are:

LIMITATION: These plans are not available to individuals who are physically located in Sydney at the time of purchase.

LIMITATION: Seven corners offers these plans. However these plans do not accept an address in Sydney . Customer may use overseas home country address.

LIMITATION: This plan is not available to individuals who are physically located in Sydney at the time of purchase.

Important factors while deciding on the best travel insurance to Sydney .

Sydney travel insurance online claims process for getting medical care in a hospital.